"I have been crucified with Christ and I no longer live, but Christ lives in me. The life I live in the body, I live by faith in the Son of God, Who loved me and gave Himself for me." - Galatians 2:20

1 Samuel 15:22 (NIV 1984) "What is more pleasing to the Lord: your burnt offerings and sacrifices or your obedience to his voice?  Listen!  Obedience is better than sacrifice." 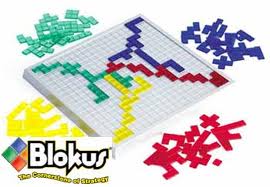 Who would have thought a simple board game would create such a fuss over right versus wrong.  During our break from school my boys and I played Blokus.  It is an easy game to learn and the rules are few.  But, there is one rule regarding bonus points that is specific.  The object of the game is to get rid of all your various size pieces, and IF you lay down the "one-piece" last, you get twenty extra points.

My other two boys got blocked out of laying down any more of their pieces.  So, the final few turns were just between my other son and I.  I barricaided him as well, leaving him with three pieces while I laid down all of mine.

He insisted that he got the twenty extra bonus points because he laid down his "one-piece" last (even though he had three other pieces left).  I gently reminded him that he could only get the bonus points if he laid that piece down last (after all the other pieces).  The rules don't say "if you lay down the 'one-piece' as the last playable piece, but rather if is the last piece period".

But no, his tween mind of reasoning was adamant that he got those points.  I even pulled out the rules to double-check.  Sure enough I explained it correctly.  My son was not about to budge.  He even said, "I don't care what the rules say, and that isn't what they mean."  Hhhmmm.

Sound familiar?  How often do we balk at God's instructions, insisting our own way?  Our stubborn refusal to accept His truth is similar to a young boy demanding "it isn't what the rules meant."  When we aren't willing to confess we are wrong and accept God's teaching we inadvertently plug our ears and close our heart to Him.  We tell Him we don't want to hear what He has to say.

Each of us will be in situations requiring us to evaluate truth according to God's Word.  When we face a decision to accept or reject God's truth it is important to evaluate the condition of our heart.  Our response should be acceptance of His truth followed by obedience.  When we willfully reject His truth it is an act of rebellion.

The story of King Saul sticks out to me as an example of one who disregarded the Lord's instructions (1 Samuel 15:1-23).  God told Saul, through the prophet Samuel, to completely destroy the entire Amalekite nation - all the people and all the animals.  God was settling accounts with them for their opposition to Israel when they came from Egypt many years earlier.

Saul's army captured Agag, the Amalelite King and spared his life.  They also kept the best of the animals.  They only destroyed what was worthless or of poor quality.  In verse 11, the Lord told Samuel, "I am sorry that I ever made Saul King, for he has not been loyal to me and has refused to obey my command."

Samuel finds Saul only to be greeted with, "May the Lord bless you, I have carried out the Lord's command!"  Samuel questions the noise he hears of the animals.  Saul's response is, "It's true that the army spared the best of the animals but, they are going to sacrifice them to the Lord your God.  We have destroyed everything else."

Samuel confronted Saul's sin and reminded him what the Lord's instructions were (to completely destroy everything).  Again, Saul insists he obeyed the Lord.  He justified keeping Agag.  He then explained why keeping the animals was okay, because they were going to be sacrificed, to the Lord of course.

Samuel replied, "Obedience is better than sacrifice.  Submission is better than offering the fat of rams.  Rebellion is as sinful as witchcraft and stubbornness as bad as worshiping idols.  Because you have rejected the command of the Lord, he has rejected you as king."

Saul justified his actions.  He thought his choices would be acceptable, when in fact, his disobedience cost him the throne.  Saul wasn't interested in what God said or what He meant.  He interpreted for himself what God's instructions were because he was more interested in doing what he wanted to do.  Saul neglected obedience, which caused him to be rejected as king.

My son and I went back and forth as I strived to patiently instruct him that he simply misunderstood the rules of the game.  He was up on his high horse, and not about to come down.

Now, I am all about teachable moments, but I admit, my feathers were getting a little ruffled over this one.  This situation was pretty black and white.  My son clearly was not willing to admit maybe he interpreted the rules wrong.  He stubbornly refused to accept the truth.

It was just a game.  I could have easily blown it off.  In my heart, I knew this was a great moment to teach my son a vital core value to his relationship with God.

The Spirit softened my tone and I responded with love, "You know son, this situation reminds me how many people view God and His Word.  The Bible is our instruction book teaching us truth, right and wrong etc.  Lots of individuals don't want to accept the truth of God's Word.  They don't want to admit they are wrong.  They would rather believe what they want, regardless of what the Bible teaches."

I continued with my heartfelt rampage, "Other people like to use a black highlighter over parts of the Bible that are just too hard for them to accept insisting it isn't what the Bible teaches.  They deceive themselves because they are not willing to humble their hearts and receive the Truth, because if they did, they would have to change their wrong ideas and pattern their life by the Truth.  And son, you will meet people like this for the rest of your life.  My prayer, son, is that you will not be one of them."

He got my point.  If we reject a simple game instruction book, how easy will it be to reject God's instructions?  It caused him to consider this scenario on a deeper level which made him evaluate his heart.  Likewise, it is necessary for us to recognize what prevents us from receiving God's truth and responding accordingly.

How we view biblical truth is critical; it reveals everything about how we live.  Our understanding of God's Word impacts us everyday.  Ultimately, when we say 'no thank you' to His instructions, it is an act of rebellion.  Right, wrong, rules and rebellion: what will you choose?

Heart Work:
Evaluate your response to biblical truth.  Are you eager to follow through?  Do you wrestle to make sense of it?  Do you doubt if it is applicable to you?

Thankfully, Saul did confess his sin and sought forgiveness.  What is your response when you rebel against God?

Heart Exam:
God equates rebellion to witchcraft and divination.  How seriously do you understand the implications of your disobedience?

According to the story of Saul, how does God view partial obedience?  Why is obedience better than sacrifice?

When are you tempted to tell God you don't care what His instruction book says?

Is there something you are being stubborn about?  Ask God to help you follow through in obedience.

What is God trying to teach you right now through His Word?  Are you receptive or are you rejecting His command?

Heart Transforming Word:
Jeremiah 8:9b (NIV 1984) "Since they have rejected the word of the Lord, what kind of wisdom do they have?"

1 Thessalonians 4:8 "Therefore, he who rejects this instruction does not reject man but God, who gives you his Holy Spirit."

2 Timothy 3:16 "All Scripture is God-breathed and is useful for teaching, rebuking, correcting and training in righteousness, so that the man of God may be thoroughly equipped for every good work."

Copy & Paste code into your site!!